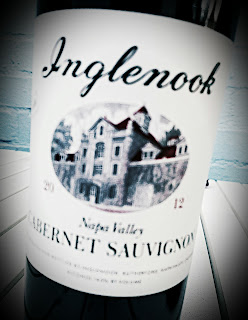 The Inglenook vineyards began in 1879, when a Finnish sea captain decided to make a European-class wine estate in landlocked Rutherford, California.  His nephew inherited the place after it had already been noticed by the rest of the wine world.  Film director and writer Francis Ford Coppola, along with his wife Eleanor, bought Inglenook and moved there in the 1970s.  According to the Inglenook website, they "have spent forty years reuniting the original vineyards, returning winemaking operations to the chateau, and restoring Inglenook's illustrious heritage."  Coppola works with wine consultant Stéphane Derenoncourt and Managing Director and Winemaker Philippe Bascaules to create wines, now under the original trademark of Inglenook.  The six-time Oscar winner has been making wine for nearly as long as he’s been making movies.  He’s been quite successful at both, and reportedly used the profits from "The Godfather" to buy the Inglenook property.

This wine is from the Rutherford appellation of Napa Valley, made from 85% Cabernet Sauvignon grapes, 12% Cabernet Franc and 3% Merlot, grown in the Cohn, Red Barn and Chateau vineyards.  It was aged in 90% French oak barrels, more than a third of which was new oak.  Alcohol hits the typical 14.5% abv mark, while the wine retails for a hundred bucks.

The winemaker describes the 2012 vintage like this: "...one of the best vintages in recent history because of near perfect climate conditions. The entire season was marked by moderate temperatures, which lasted through September and October. Having no heat spikes or rain to contend with in the fall allowed the fruit to hang on the vines longer, giving the grapes better concentration and ripeness as well as more textural dimension and flavor complexity."

This dark wine bursts with rich cassis, vanilla and tobacco notes on the nose.  Black fruit flavors are met with minerals and spice and the tannins are a step away from youthful, vibrant yet showing a soft side.  The Cabernet Franc shows up wonderfully spicy with a green note in tow, while the Merlot even sneaks in a whiff of smoke.  It's a pleasure from sniff to swallow, and the lengthy finish reminds one to go back for another sip.