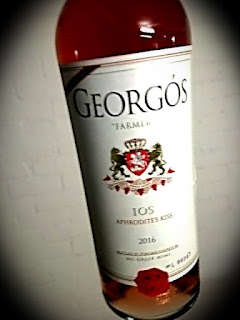 Georgós Zanganas founded Nu Greek Wines of Sonoma after moving to the U.S. and having trouble finding the Greek wines he left behind. He noticed that California wines gave him a headache, while his Greek faves never did.  His solution is in this bottle, and I'm told it sells at Northern California Whole Foods Markets and on restaurant wine lists in San Francisco and Los Angeles.  For the Georgós "Farmer" Ios Aphrodite's Kiss Rosé, Zanangas imports the bulk wine from Greece to Sonoma County, where it is bottled at Deerfield Ranch Winery in Kenwood under the direction of winemaker Robert Rex.

Zanangas says in a publicity Q&A that it's a pretty nifty trick to make wine this way.  "It comes by boat in 1,000-liter and 24,000-liter bladders from Greece," he says.  "Once the wine is harvested in Greece, we get it into a stable form so it does not get spoiled during its 45-day voyage from the ancient port of Piraeus in Athens to Oakland and then by truck to the winery in Sonoma.

"We blend and age our red wines in Sonoma," he continues.  "Once they are bottled, we wait four to six months before we release them to market.  We bottle the white and rosé right away, which is 100% wine from our Greek vineyards."

Of course, this wine is straight up Agiorgitiko, or Saint George, grapes.  It's reportedly one of the most widely planted grapes in Greece, but one top wine expert says most of the vines in the country are virused.

The publicity team claims the Georgós wines are healthier because of the lower alcohol, sulfites and histamines.  Those qualities are said to eliminate the headache often caused by wine.  They also promise softer tannins and high antioxidants.

The wine is is billed as a sort of halfway point between Pinot Noir and Sauvignon Blanc.  If that sounds a little odd to you, you're not alone.  I've often wanted one or the other, but never have I wished to be somewhere in between.  It's unoaked and retails for $23.

The color of this rosé is almost like bourbon, a nearly burnt orange that tends more to brown than pink.  It doesn't look much like rosé, and it doesn't smell that way, either.  First whiff, I get an earthiness that borders on foxiness, as in wines made from North American grape varieties.  Strawberry with an intense mineral overlay then takes over.  The palate offers plenty of cheerful fruit and earthy minerals but little acidity, which is reportedly an issue with Agiorgitiko grown in lower altitudes.  Ios is not what most American consumers would expect in a rosé, but more adventurous souls won't be disappointed.