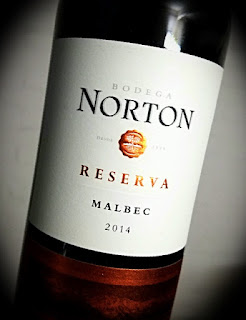 The Malbec grape grows all over the world, but nowhere as in Argentina.  They grow about three-quarters of the world's Malbec grapes.  If Cab is king in the U.S., Malbec is monarch in Argentina.  Poorer wine producers in the country sometimes can't afford enough French oak barrels to go around for all their wines.  If a wine has to go naked, or unoaked, to stretch the peso, it'll be Cabernet Sauvignon that does without, not Malbec.

Often relegated to the status of "blending grape" in France, Malbec is revered in Argentina and used most often in varietal wines.  The Argentines sometimes mix it with Bonarda, a South American treasure that has yet to break out globally, but watch out when it does.  It's a beautiful grape, too.  Malbec grows better and maintains its acidity in higher elevations, so you find it often in mountainous regions.

Bodega Norton sits in the foothills of the Andes in Mendoza's Lujan de Cuyo region, a place known for its Malbec plantings.  Their five vineyards in the First Zone of quality are planted with vines that average 30 years old, but some are as old as 80 years.  They were reportedly the first winery in the area some 120 years ago.  Norton is possibly the most familiar Argentine label for American wine lovers.

The 100% Malbec wine is aged 12 months in French oak, then more in the bottle.  Alcohol is restrained, at 13.5% abv.  It retails for $19.  The Reserva Malbec consistently gets high ratings from those who attach numbers to wines and made a leading "Best Of" list last year.  It's one of Norton's new line of signature wines, and they also are unveiling a Privada Family Blend line which reportedly were once reserved for their private cellars.

This Norton is pitch-dark with a red rim and carries dark aromas on its nose.  Blackberry, blueberry and currant are predominant, with smoke and a rack full of holiday spices completing the scene.  On the palate, rich bold fruit comes forward on a wave of pepper and minerals.  The acidity is bright and the tannins are perfect, enough for a meat feast but not too much for sipping.  It’s a delightfully smooth quaff.  The savory aspect lingers medium-long on the finish.  It drinks like a youthful wine that is beginning to take on the character of its few years.