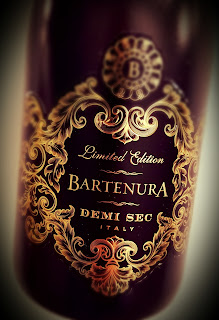 Here's a little sparkler from Italy, which lands on the sweet side, and is kosher.

The Italian Bartenura winery was named for a 15th century rabbi near Forli who was known as The Bartenura for his commentary on Jewish law.

The Glera and Moscato grapes for the Bartenura Demi-Sec reportedly came from "all over the greatest regions of Italy," which usually means the advantage of location is taken away in favor of more affordable fruit.  The wine has an easy-drinking 10% abv number and sells for $24, a little pricey considering a good prosecco is half that cost.  The winery seems to hang their hat on a blue-bottle Moscato, which is eye catching and likely on the sweet side, too.

The bubbles are cheery enough despite their quick disappearance. The nose is floral, and that's an understatement.  Bouquets of flowers are in this bouquet.  On the sip, things only get better and sweeter.  It's not sugar overload, though.  It's a nice, sweet, flirty, pleasant sweetness - not for dessert, but for anytime.