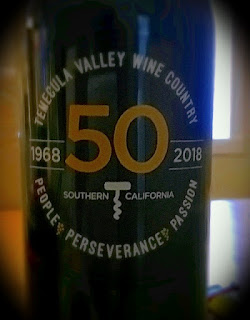 Temecula Valley Wine Growers are celebrating their 50th anniversary with a special wine release.  The wine style was decided by a group committee made up of Hart Winery's Jim Hart, Baily Winery's Phil Baily and Jon McPherson of South Coast and Carter Estate wineries.  They tossed around ideas like a Bordeaux blend, a Super Tuscan-style blend and even one made from "offbeat" international varieties, including Portuguese.  The wine they finally decided upon is made from 50% Syrah, 26% Grenache and 24% Mourvèdre

TVWA's director Krista Chaich says the 50th Anniversary wine perfectly represents the "People, Passion and Perseverance" theme of Temecula Valley Southern California Wine Country.  She says the 50th Anniversary wine will be available for purchase at special events and through Hart Winery, retailing for $50.  Special etched magnums will also be available for purchase.

This Temecula wine is a medium dark beauty.  It offers up a bit of oak on the nose, but it smells beautiful.  Smoke, vanilla, tobacco, dark fruit.  It may be a little heavy-handed, but it's enticing.  The palate doesn't completely follow suit, though.  It tries to be a Rhône, but trips up about at Pinot Noir.  One or the other, okay.  In between, not so much.  The wine tastes pretty good, but it's a bit thin, with some tartness that's not really welcome.  Nice try, but it misses.  There are plenty of good wines being made in Temecula, though, so don't let this scare you away.