Tempranillo By Another Name 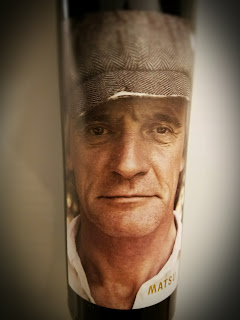 "Strength, nerve and courage" is on the label of the Matsu wines from Spain's Toro region.  Matsu means "wait" in Japanese, says the winery.  It's a tribute to "all the viticulturists who have been working in the vineyards for generations."   The label also features images of real life viticulturists, to a somewhat startling effect.

Spain's D.O. Toro has a dry climate, extreme temperatures and 100-year-old vines.  The grapes were biodynamically farmed and harvested in early October.

Matsu's 2015 El Recio is made entirely from Tinta de Toro grapes, which is the Toro name for Tempranillo.  The vines are nearly a century old and the wine was fermented in concrete and aged in French oak for 22 months.  Alcohol hits 14.5% abv and the retail price is $22.

This beautiful Toro wine is dark, deep and delicious.  The grapes make a wine of such a deep indigo that no light comes through it.  Aromas abound, like blackberry, cassis, anise and vanilla.  The flavors run along those same lines, with big, jammy fruit and a tarry understroke.  Acidity is spot-on and the tannins are plenty firm without being a distraction.