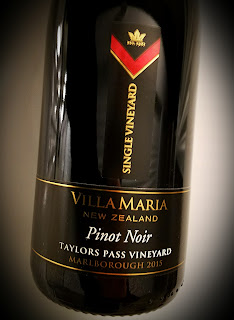 Welcome to Aotearoa - that's Māori for New Zealand - and the bold, delicious wines made there.  I'm a full-flavor kinda guy most of the time, so I've always been most intrigued by the wines of the Kiwi, which seem to leap from the glass both by aroma and flavor.

There's an online tasting session this evening featuring the wines of New Zealand's Villa Maria, which will feature winemaker Kathrin Jankowiec.  It starts at 5:30 p.m. PT.  You can no doubt keep up nicely on Twitter.

Villa Maria was founded by George Fistonich in 1961 as a five-acre vineyard in Auckland.  He and his wife ran the show themselves until he expanded in the 1970s.  Sir George was knighted by his government in 2009 for his service to the nation’s wine industry.  He took Villa Maria 100% screwcap in 2001.

The winery now has estate vineyards on both the North and South islands:

The website description of the Taylors Pass Vineyard makes me want to get online with Air New Zealand right away.  "Picturesque, on the north bank of Marlborough's meandering Awatere River."  The vineyard consists of various soil types, from silty loam over gravels to deep, stony gravels.

For this Pinot Noir, the single, destemmed berries are vinified to full malolactic fermentation and aged 16 months in French oak barrels, 30% of which are new.  Alcohol sits at a very reasonable 13% abv and it sells online for about 45 bucks.

This wine looks medium dark in the glass and smells that way, too.  The nose boasts black tea and coffee notes, but not that elegant Burgundian stuff.  It's the blackest tea and espresso that comes through beside black plums and berries.  The palate shows big, dark fruit, too, and a bold cola note that's tinged by black cherry.  Acidity is zippy and the tannins are firm, but it's Pinot all the way.  I paired it with my wife's delicious sautéed mushrooms, and it was perfect.