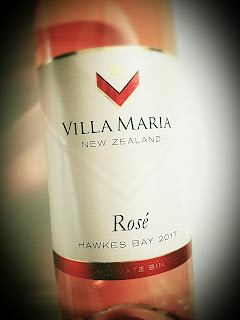 A recent virtual tasting event shone the wine spotlight on New Zealand, specifically Villa Maria winery.  Winemaker Kathrin Jankowiec guided us through a half dozen of her creations and took a good look at their Taylors Pass Vineyard, on the north bank of the meandering Awatere River.

I’m a full-flavor kinda guy most of the time, so I’ve always been most intrigued by the wines of the Kiwi.  The Villa Maria wines fall right into my wheelhouse.

Villa Maria was founded by George Fistonich in 1961 as a five-acre vineyard in Auckland.  He and his wife ran the show themselves until he expanded in the 1970s.  They now have estate vineyards on both the North and South islands.  Sir George was knighted by his government in 2009 for his service to the nation's wine industry.  He took Villa Maria 100% screwcap in 2001.

The winery now has estate vineyards on both the North and South islands:

This wine is made from a combination of grapes taken from throughout New Zealand's east coast.  The grapes were gently crushed with some getting extra skin contact to release their color to the wine.  The remainder were pressed "straight to tank."  The wine is imported by Ste. Michelle Wine Estates and sits at a low 12% abv.

This wine is nearly neon, the salmon pink-orange is so deep and rich.  Its nose smells of strawberries and an overlay of herbal notes.  It's not quite like Provence, but it's close.  The dry palate is gorgeous, full of that bushel basket of strawberries and an earthy quality on top.  The acidity is rather gentle so sipping it is recommended.  However, it will pair nicely with salads and snacks.