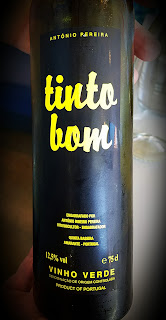 This is for everyone who loves Indian food, but hates the wine lists.  There's a place that gets what sort of wines go with spicy, flavorful Indian cuisine.  L.A.'s Badmaash brings astounding dishes to the Fairfax district with a wine and beer list to match.

It's a super-abbreviated list, as it should be.  It's a list that recognizes that if you want a high-alcohol, high-tannin flamethrower Cab, you're probably dining somewhere else anyway.  Cardamom also offers a well-curated list of wines which pair well with the cuisine, but they do cave in and allow some big, oaky reds to sneak onto the page.

Badmaash offers some truly inspired glasses, like a Riesling, or a Chardonnay by Sashi Moorman and Rajat Parr.  And they have the curiously-titled "chilled red" that goes by the name of the Portuguese region where it was made, Vinho Verde.

I'm familiar with Vinho Verde wines from Portugal, young whites designed to refresh, not to impress.  However, I had never had a red one.  Verde, of course, means green, but as it applies to the wine, green means young.

Tinto Bom red Vinho Verde is young, but unlike the white Vinho Verdes, it is actually aged several years.  It's a perfect complement for an Indian meal.  There's complexity and a great subliminal flavor that works with the food, but doesn't fight it.  The tannins are very low and it's served chilled to maximize that effect.  Alcohol is only 12.5% abv, and the price is usually about twice the white Vinho Verdes cost.  Look to pay just under $20 a bottle.

Antonio Ribeiro is the winemaker, and to my knowledge he's not the Antonio Ribeiro who played Carlton on Fresh Prince of Bel-Air.  His Tinto Bom is made from Tinta Nacional grapes.  It offers a grapey, earthy nose and a slightly fizzy appearance, much like Lambrusco.  This wine has a complex palate of somewhat muted flavors, allowing the food to step forward and be the star of the show.