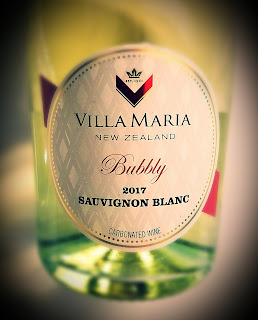 A recent virtual tasting event shone the wine spotlight on New Zealand, specifically Villa Maria winery.  Winemaker Kathrin Jankowiec guided us through a half dozen of her creations and took a good look at their Taylors Pass Vineyard, on the north bank of the meandering Awatere River.  I've never been to the land of the kiwi, but after checking out some images online, I'm ready to call Air New Zealand right now.

Villa Maria was founded by George Fistonich in 1961 as a five-acre vineyard in Auckland.  He and his wife ran the show themselves until he expanded in the 1970s.  They now have estate vineyards on both the North and South islands.

The winery has grown over the decades and now has estate vineyards on both the North and South islands:


The 2017 Villa Maria Bubbly Sauvignon Blanc hits only 12.5% abv and sells for about $15.  I mentioned its bold qualities on Twitter, and the winery replied, "It's a great way to wake up your palate!"  @IsaacJamesBaker noted the "green apples, white peaches, bell pepper, saline and nettle" notes.

It's a bubbly Sauvignon Blanc, with small bubbles that vanish quickly but make the glass festive while they're there.  The nose hits like a freshly mowed lawn, seeming even more pungent than a NZ SauvBlanc usually does, while the palate displays all the citrus zest and minerals one would expect from the varietal.  Acidity is right at the top, as expected.