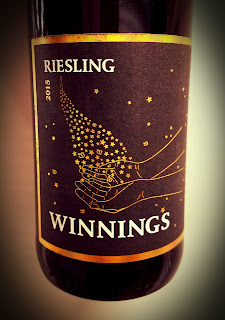 German wines tend to fall beneath the U.S. wine drinker's radar.  Aside from Riesling, you'll be hard-pressed to find a German grape variety or even a German version of a more familiar grape, on a supermarket shelf.  Specialty wine stores will dig deeper, but depending on their inventory they may not have a very wide coverage.  With this in mind, I was thrilled to be asked to participate in an online tasting event involving German wines, with Matthew Kaner, wine director and partner at several wine bars in the Los Angeles area.

Kaner says of the new world of German wine, "there's more than just Riesling," and he went on during the event to cover a Muller-Thurgau, a Pinot Blanc and a Pinot Gris as well as a Riesling.

Another invitee, Dezel Quillen (@myvinespot) commented that he appreciates "the brightness, raciness, and lower alcohol levels in these wines. But those characteristics are trademarks of Germany's refreshing, cool-climate wines. Not to mention their food-friendly nature."  He knows what he's talking about.

Kaner spoke about German Rieslings, with their ability to age incredibly.  He said they are "time capsules" that can age for a century and called them the "archetype of an age-worthy white wine."  He also offered up an interesting tidbit for wine travel buffs, that the best way to experience Pfalz wine country is to "fly into Frankfurt and make the drive. It's quicker than LA to Santa Barbara."

The Von Winning 2015 Riesling called "Winnings" is a good way to do just that.  Imported by Skurnik Wines of New York, the Terry Theise selection scores big while delivering its attributes in a most understated way.

The Von Winning Weingut has been around for awhile, since 1849.  Leopold Von Winning really started the emphasis on quality wine in 1907, practically current times by European standards.  The team is led today by Stephan Attmann, whom Theise calls an "obsessive winemaker" on the Skurnik website.  The Von Winning grapes are farmed organically while the wines are fermented in oak barrels and handled as little as possible, often bottled unfiltered.

This Riesling from the Pfalz region hits 11.5% abv and sells for about $20.

The 2015 Winnings Riesling shows a golden tint in the glass and a nose which makes me glad I inhaled.  It's austere, with huge slate notes backed by hints of petrol that are starting to show and a whiff of citrus zest to finish off the scent.  The palate is smart and savory, with a sedate acidity softened by the almost creamy mouthfeel.  The finish stays long and leaves tangerine notes to remind the sipper of the pleasure.