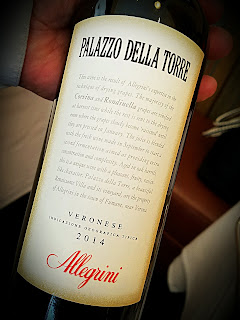 A special occasion is always made better with special company, and a special wine.  During anniversary week for Denise and I (the 20th!) we had several special meals at places which mean a lot to us.  The Beverly Hills Italian restaurant Da Pasquale is one of those places.  Not only have we never - not once - been disappointed with a meal there, they seemed to put on an extra special table for our day.

I wanted a Primitivo wine for that meal, but they said they were out of that variety.  I shifted gears and took our server's suggestion that I try a different wine, and I'm glad I did.  It's nice to have people around who are trustworthy.

Allegrini's 2014 Palazzo Della Torre is a blend of Veronese Corvina, Corvinone and Rondinella grapes, with a splash of Sangiovese.  Here's the twist: the winery says, "A small percentage of the harvested grapes are left to dry out until December and then added to the previously vinified fresh grapes."  That gives a fleshy, meaty mouthfeel to the finished wine.

You can't taste it, but the wine is named after what's called a "splendid masterpiece of Renaissance architecture now owned by the family."  Aging went on for 15 months in used oak barrels, with another seven months in the bottle.  Alcohol sits at 14% abv.  It looks like it sells for about $20.

The wine shows a bit hot on the nose at first, but settles down quickly.  Aromas of stewed figs and red fruit come paired with autumn spices and earth.  It's a hearty red, with red plums, cassis, and more spice on the palate.  I paired it with pappardelle and lamb shank, to much delight. It also went well as a mate to risotto with beef and mushrooms.