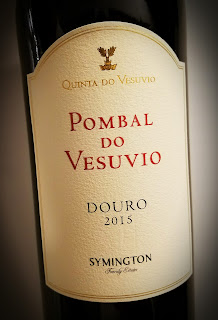 Portuguese wine is booming and making a big comeback after a period of decline.  James Halliwell writes on Harper's UK that the growth reported by Wine Intelligence is "driven in part by a rise in tourism and economic recovery after years of financial crisis."  He writes that competition is on the upswing, wine drinkers are moving away from mainstream brands and the up-and-comers are often heavily discounted.

You probably realize that Portugal is known primarily for Port wine, a fortified wonder.  However, you may not be so familiar with the Douro region's still wines, made for the dinner table.

The Quinta do Vesuvio is one of the great estates of the Douro Superior - the sub-region of the Douro farthest East.  It is home of some of the world's finest Ports, and is one of the region's largest estates, with 336 acres under vine.  It's owned by the Symington family, a fifth-generation Port house.  The pombal, by the way, refers to a pigeon nesting area on the property.

This treasured quinta provides the fruit for the 2015 Pombal do Vesuvio, a blend of three Portuguese grapes: 50% Touriga Nacional, 45% Touriga Franca and 5% Tinta Amarela.  The first two reportedly give backbone and rich structure to the wine, while the latter accounts for acidity and bright fruit aromas.

Winemakers Charles Symington and Pedro Correia describe the 2015 vintage as a troubling, but ultimately satisfying one.  Lots of rain bookended a very dry winter, and the summer was hot.  The vines produced a low yield, good for grape quality.  The wine hits a mere 13.5% in alcohol, was aged ten months in French oak barrels and it sells for $28.

This Douro Valley still red is loaded with character.  The color is so dark I can barely tell it's red.  The nose is full of minerality, earth, cigars and leather.  Oh, yeah, there's a bit of dark, brambly fruit in there, too.  The palate displays the same, with some licorice thrown in as if there wasn't enough happening.  Bracing acidity and firm tannins make for a muscular drink which is begging for a nice, fatty steak.