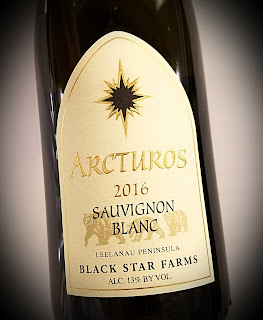 Northern Michigan's Black Star Farms sits on the 45th parallel, like some other great wine regions worldwide.  It's on the Leelanau Peninsula, that claw of land which sticks up into Lake Michigan.  Owned by Kerm and Sallie Campbell, with Vladimir Banov as the winemaker, Black Star not only produces wine, but also has an inn, fine dining and stables on the property.  It started as an equestrian facility.  They also make brandies from cherries and other fruit.

The grapes for their Arcturos Sauvignon Blanc were grown on the Leelanau and Old Mission peninsulas.  It's possible the name of the wine is derived from the legend of Icarius.  It is said he gave wine to mankind, but was murdered by them.  The story claims the folks weren't accustomed to being drunk, and thought they were poisoned.  Icarius supposedly then became Arcturus, who now resides with those other Greek legends in the night sky.

Late rain during the 2016 vintage necessitated some judicious picking and sorting.  The wine is completely dry, as indicated on the dry/sweet scale on the back label.  Alcohol tips 13% abv and the wine sells for $18.

This pale yellow Sauvignon Blanc shows new world grassiness on the nose, along with lemon, grapefruit and minerals. On the palate there is citrus, intense minerality and great acidity.  The finish bears a clean citrus note.  It's very drinkable, and very pairable.