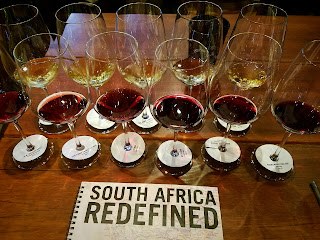 A cadre of winemakers from South Africa are trying to put a face on a region that is completely foreign to many U.S. consumers.  South African wines are somewhat hard to find, at least in Los Angeles, unless one shops specialty stores or huge wine inventories.  The region is not likely to be found on the supermarket shelf or very many restaurant wine lists.

Capensis winemaker Graham Weerts organized the tour, in which he and five friends are talking up South Africa, where a big shift in winemaking has taken place over the past 10 to 15 years.  Weerts and his pals say they are representing the country's 750 producers and putting their best wines forward.  I was invited to attend their event at the Los Angeles restaurant Republique.

Weerts outlined some of the difficulties South Africa's winemakers have faced.  The embargo during apartheid prevented the export of red wines, causing many vines to be ripped up. However, plenty of old-vine white grapes remain.  That's because the white grapes were used for distilling at the time.

Weerts bristled as he spoke of big U.S. producers which have gone to South Africa in the past, telling winemakers to "make a funny little wine and put a funny little cat on the label" - failing in the process.  Now the focus is on quality, and Weerts says South African winemakers won't be told how to live their own lives, "won't be told what to do."

Considering the effort involved in bringing their story to California, it's no surprise that the eleven wines showcased during the masterclass were of the highest imaginable quality.  The reds all had the mark of minerals on them and the whites were among the most elegant sips I've ever had.

A.A. Badenhorst Ramnasgras 2017 - Adi Badenhorst was reportedly fired from a previous job for having a bad attitude.  He says he has "shed his German heritage and habits of punctuality and precision" in favor a more free-form method of making wine.  He claims that his Swartland region is "a very free place to make wine."  His Ramnasgras is 100% Cinsault from vines planted in 1963, aged for one year in a large wooden vat.  Alcohol tips 13% abv and the wine retails for $45.  It has a floral nose with minerals on the palate, almost a rusty quality.  Great acidity.

Sadie Family Wines Soldaat 2017 - Eben Sadie says says "modern winemaking is like instant coffee, safe and secure," while real winemakers take chances.  He walks the walk, with one of the more varied plantings outside of a laboratory.  Sadie's Swartland Mountain Areas vineyards are full of grapes like Syrah, Grenache, Cinsault and Chenin Blanc, while experimenting with fruit such as Verdelho, Palomino, Xinomavro, Assyrtiko, Pontac, Alicante Bouchet and more.  His Soldaat is made from 100% Grenache Noir grown in Piekenierskloof, north of Swartland, in 48-year-old vineyards.  He says the high altitude gives Grenache the sun radiation it needs without the high temperatures.  The wine was aged in concrete vessels, carries alcohol at 13.5% abv and sells for $75.  It has an awfully pretty nose and a very savory palate with good fruit showing.

Storm Vrede 2016 - This wine is 100% Pinot Noir grown in the Hemel-en-Aarde Valley, an hour and a half east of Capetown.  The wine was aged over eleven months in French oak barrels, 25% of which were new.  13.9% abv, $55.  A sharp nose, mineral-laden and peppery is a bit of a surprise.  The palate is tart and savory, with a tea note.

Beeslaar Pinotage 2016 - Abrie Beeslaar is billed as the "king of pinotage," a dubious honor considering the low regard the South African grape has found in the U.S. due to subpar efforts in previous times.  His wine is 100% Stellenbosch Pinotage grown in shale soil, aged 19 months in French and American oak.  14.4% abv, $55.  A perfumed nose of dark fruit and soy sauce, opens up to a palate that’s chalky with minerals and drenched in savory cherry flavors.  Needless to say, it's markedly nicer than the Pinotage wines I've had before.

Kanonkop Estate Paul Sauer 2015 - Beeslaar's Kanonkop Estate is situated on the lower slopes of the Simonsberg Mountain in the Stellenbosch Region of the Cape in a place known as the "red wine bowl" of South Africa.  This Bordeaux blend of 70% Cabernet Sauvignon, 15% Merlot and 15% Cabernet Franc was aged for two years in new French oak.  14.5% abv, $60.  It has a big, red fruit nose, a bold palate and an elegant herbal note.

Boekenhoutskloof Syrah 2015 - This is 100% Swartland Syrah, grown in red slate soil and aged for 18 months in big vats and barrels.  13.9% abv, $65.  The nose was rather tight, but pepper shows up after a minute or two.  On the palate are flavors of blueberry, raspberry, and minerals with a fantastic acidity.  The first vintage of this wine was in 1997 and was the last for 20 years.  The story goes that the vineyard was paved over for a golf course parking lot, and it took the winemaker two decades to find suitable replacement grapes.

Beaumont Family Wines Hope Marguerite 2018 - Sebastian Beaumont focuses largely on Chenin Blanc in the Bot River region.  Hope Marguerite was aged on its lees for ten months.  12.5% abv, $45.  A beautiful nose of stone fruit and citrus leads to a palate which is elegant, gorgeous, full and creamy.  Meyer lemon and tangerine flavors join a great acidity.

Capensis Chardonnay 2015 - Weerts explores Chardonnay on South Africa's Cape of Good Hope, from old vines in old soil.  He says the Western cape is either the "oldest new-world wine region or the youngest of the old-world."  His Capensis is 100% Chardonnay from the Western Cape, tank fermented with nearly a year in French oak.  14% abv, $80.  There is citrus and oak on the nose - almost a smokey, buttery feel.  The palate is possibly too oaky for some tastes, but it hit me just right.  It's the kind of Chardonnay I like to drink at Christmastime.  The fruit shines through.

Sadie Family Wines Palladius 2016 - A blend of eleven different grape varieties from 17 vineyards across Swartland, this wine is aged for two years in amphorae, concrete eggs and oak vats.  13.5% abv, $150.  The nose is tight, but light citrus on the palate adds to an elegant acidity and a savory angle.  Nothing seems to take charge, but everything works together.  Worth $150?  I don't know, but it's built to age for 10-15 years.

Vergelegen Flagship GVB White 2016 - This wine is 80% Semillon, 20% Sauvignon Blanc from Stellenbosch, grown close to the coast, "where the wind blows like a banshee."  It spent nine months in a barrel.  13.9% abv, not available in the U.S.  A big herbal nose, rivals New Zealand for grassiness.  There’s a new world palate, too, with more herbal notes.

Klein Constancia Vin de Constance 2015 - This dessert wine comes from 100% Muscat de Frontignan grapes grown in Constancia.  It was aged in a mix of French and Hungarian oak and French acacia.  13.9% abv, $95.  The wine is very gold in the glass and has a viscous mouthfeel, showing a nose and palate of honeyed apricots, peaches and nectarines.  No botrytis here, the grapes were vine-dried.