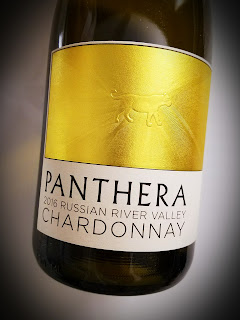 With estates in Argentina and South Africa as well as California, Hess Winery really gets around.  Founder Donald Hess staked out a claim on Napa Valley's Mount Veeder in the 1970s, when there was still room to move around.  He retired in 2011 and passed the torch to the 5th generation of the family to carry on old traditions and forge new ones.  Dave Guffy is only the second person to lead the winemaking team at Hess.

The Hess line includes Panthera Chardonnay, which takes its name from an east Asian word meaning yellowish animal.  The word also describes the genus of the cat family which contains its largest members.

The 2016 Panthera is 100% Chardonnay from the cool-climate Russian River Valley, aged for 15 months in French oak, more than a third of which was new.  Alcohol tips 13.3% abv and the wine sells for $45.

The wine has an intriguing nose which shows apricot, Meyer lemon and tropical fruit.  The palate shows why people like California Chardonnay.  Tropical notes highlight the flavors, with a strong layer of minerals underneath.  The 15 months of oak don't interfere as much as one might think, adding a noticeable - but not dominant - aspect to the profile.  Racy acidity begs for a food pairing, and I'm thinking swordfish.  The finish carries the fruit, not the oak.