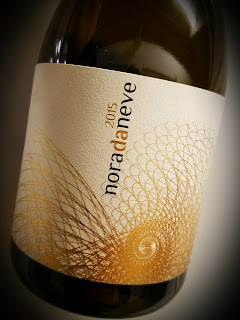 Albariño wine is usually put on the market immediately after production.  Like many white wines, it is presented young and given a short window of drinkability.  This one came to me by way of a publicity person, and it has a few years on it.  I like to have white wines with some aging, so this was a pleasant surprise.

Viña Nora winemaker Eider Rodriguez used Albariño grapes which were grown in the estate's rocky, granitic soil, full of river stones.  The winery is located in the land of Albariño, the Rias Baixas DO, in the Condado do Tea subregion.

The 2015 Nora da Neve was fermented and aged in French oak barrels.  The juice was stirred for five months to keep the lees suspended, in much the same way that Chardonnay is handled in Burgundy.  The practice is called bâtonnage, and it imparts weight and character to a white wine.  Alcohol tips 13% abv, and you should prepare to pay in excess of $30 for a bottle.

This wine is so golden yellow, it’s incandescent.  The nose really jumps, too, with the floral and citrus aromas expected in Albariño plus whiffs of fennel, white pepper and herbs.  The palate shows lemon, tangerine and oak spice, something which is not normally found in this grape.  This was fermented and aged briefly in French oak barrels, not steel tanks.  Acidity is a tad flat, but it doesn’t ruin the fun of sipping it.