Lincoln A Federalist In Wine Only 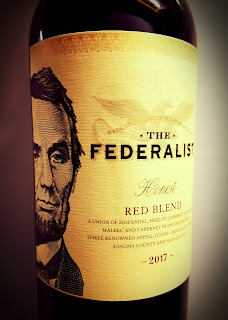 There's a bit of a ragged backstory for this wine, The Federalist Honest Red Blend 2016.  The folks at Illinois-based Terlato Wines say Honest Red pays homage to Abraham Lincoln.  Lincoln's reputation as Honest Abe may be true or it may be apocryphal.  After all, he was a politician.  There's no dispute, however, that Lincoln was no Federalist.  Terlato initiated the Federalist line with a nod to Alexander Hamilton, and the link began to fray as they expanded to other historical Americans who were not associated with the Federalist party.  For millennials, presumably, Terlato notes that Lincoln's accomplishments include emancipating the slaves and being assassinated.

This North Coast red blend offers up a dark nose of smoke, tar, plums, cigar box, vanilla, cedar and an old baseball glove.  The palate shows huge black and red fruit, also with plenty of oak spice.  BTW, the wine is said to pay homage to Abraham Lincoln.  He may have been Honest Abe, but he was not a Federalist.  But whatever.  You’re not really drinking it for the backstory, are you?  The winery advises having it slightly chilled, with food right off your grill.