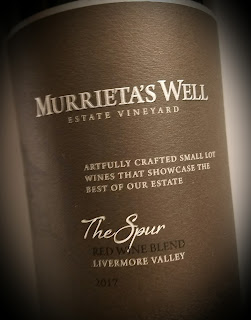 Murrieta's Well Estate Vineyard, in California's Livermore Valley, has a history almost as long and rich as the state of California itself.  The vines of the Murrieta's Well estate were first planted in 1884 by Louis Mel with cuttings from Chateau d’Yquem and Chateau Margaux, says the winery.  Mel sold the property, lock, stock and wine barrel, to Ernest Wente in the 1930s, and it's still part of the Wente Family estate.  Today, winemaker Robbie Meyer personally selects grapes from all over the five hundred acres.

He says there is "nothing quite like growing fruit in the vineyard, caring for it in the winery and crafting it into something people can enjoy."  That something, says Snooth, is food-friendly wine, the stuff of which Meyer prides himself on making.  Through the growing, the harvesting and the fermentation, Meyer says blending is where he sees the real art of winemaking.

All of the Bordeaux varieties used in the 2017 Murrieta's Well The Spur were largely grown in the Sachau vineyard, where the soils consist of mostly gravelly, coarse sandy loam.  A portion of the Cab came from the Louis Mel Vineyard, while the Petite Sirah grew in the Hayes Vineyard.  The percentages look like this:  64% Cabernet Sauvignon, 13% Merlot, 14% Petite Sirah and 9% Petit Verdot.

Meyer calls The Spur a "survey of the property."  He says the PS adds deliciousness and fleshes out the juiciness of the blend.  He put it under cork rather than a screwcap "due mainly to aesthetics."
The Spur was fermented in steel and aged for 24 months in French oak, 40% new, 40% second use, and 20% third use.  Alcohol tips in at 14.5% abv and the wine retails for $35.

The Spur has a nose that won't quit.  Plum, blackberry and black cherry aromas are as dark as the wine's color.  Whiffs of leather, anise and mocha layer onto the fruit.  The palate follows suit, with earth notes and a wonderful tannic structure and acidity to boot.