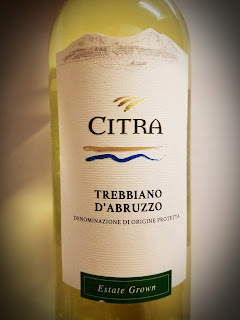 Citra Vini is an association of unified wineries in the Italian wine region of Abruzzo.  The group was established in 1973 and their vineyards cover a lot of ground in Chieti - about 15,000 acres.  The winegrowing association is located between the Majella, a limestone massif in the Apennine mountain range, and the Adriatic Sea.  Some 3,000 growers contribute grapes to the Citra effort.

Their website explains a bit of the storied history of the Montepulciano grape.  Hannibal gave the wine to his soldiers for its supposed restorative powers, and Ovid praised it in a poem.
The Citra umbrella shades a lot of labels.

Citra says the Trebbiano grape has been grown in central Italy since the Roman era.  It was originally used to make wines for the grower's family.  The 2017 Citra Trebbiano d'Abruzzo carries a relatively light alcohol number of 12% abv and it sells for about $10.

This bargain Italian white wine sports a nice nose of citrus and apricot with a savory salinity.  The savory streak takes the lead on the palate for a tasty sip.  There's not a whole lot of acidity here, which hurts food pairing a tad.  Consider this a sipper.