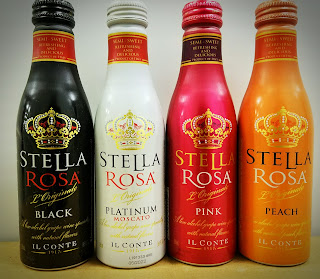 The oldest working winery in Los Angeles is getting canned.  The Riboli Family, of L.A.'s San Antonio Winery, now have four styles of their imported Stella Rosa wine available in single-serving aluminum cans.  The winery boasts that Stella Rosa is America's number one imported Italian wine, and their Aluminums line now include a tasty peach flavor.

The Riboli's recommend the Stella Rosa cans for football tailgating.  However, the cans were introduced several years ago at Dodger stadium, so it seems they are a multi-sport phenomenon.
Stella Rosa Aluminums come as 8.5 ounce single serve aluminum bottles in four flavors, Black, Platinum, Pink and now Peach.  They also come in larger format bottles, and all four clock in at a low alcohol level of only 5% abv.  The winery says the cans are not only light weight, easy to pack and smooth to drink but stylish as well.  All bottles are recyclable and stay colder.

They're simple, uncomplicated wines which also make great bases for cocktails.  Stella Rosa has a bushel basket of recipes on their website.

Stella Rosa Il Conte Black is a semi-sweet and semi-sparkling red blend, which the winery says is sexy and seductive.  It has a sweet-n-sour nose which displays a persistent earthiness.  The palate is red currant, slightly sweet and extremely drinkable.  There is almost no tannic structure, so it's very easy to find yourself gulping it.

Stella Rosa Il Conte Platinum is a semi-sweet sparkler which is the only wine I've ever known to promise a more magical life for dreamers and surrealists.  The nose is sweetly floral, as one might expect with a Moscato, but carries an earthy note on the palate which adds a bit of complexity.

Stella Rosa Il Conte Pink is a semi-sweet sparkler which aims to flirt.  The nose is all cherry Jolly Rancher, and the candy motif follows through on the palate.

Stella Rosa Il Conte Peach is a semi-sweet sparkler which claims to make summer last forever.  The nose is sweet with green apples, peach and pear juice, which dominate the palate.