Australian Shiraz To Hold With Both Hands 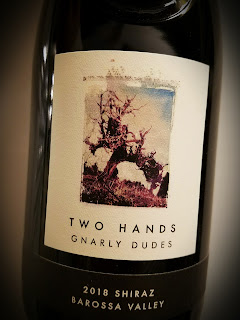 Terlato Wines tells us that Australia exports more wine to the U.S. than France, but that's a claim for which I could not find any corroboration.  In fact, the wines from Down Under appear to be the fourth most imported by the U.S. in dollars, behind Italy, France and New Zealand.  Perhaps they were thinking of exports to the U.K.  In any case, Americans are drinking more Australian wine than vice versa, from a percentage standpoint.

Australia's wine industry dates back to the 18th century, when vine cuttings were first brought to the continent from Europe and South Africa.  The country has no indigenous grapes of its own.  However, they do refer to Syrah as Shiraz, which has proven so popular that some other winemakers around the world have adopted the name.  Shiraz is the most widely planted grape in Australia.

Terlato made available to me several Shiraz wines produced under their Two Hands label.  The 2018 Gnarly Dudes is 100% Shiraz, made from Barossa Valley grapes.  That wine region is in the state of South Australia, near the city of Adelaide.

Gnarly Dudes was aged in French oak barrels for a year, and only 13% of them were new.  The remaining wood was contained in puncheons and hogsheads that were anywhere from one to six years old.  The wine's alcohol content is somewhat restrained, at 13.8% abv, and it retails for $33.

This is one big, bold Shiraz.  The wine colors up as inky black as night and smells of black fruit, leather and meat.  On the palate, it's a large time as well, with plums and chocolate flavors laced with licorice.  Oak is pronounced, but it seems about right considering how brawny this wine drinks.  Tannins are somewhat mellow, however, so it goes down easily.