A Beast Of A Cabernet 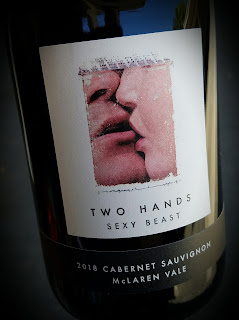 Terlato Wines tells us that Australia exports more wine to the U.S. than France, but that's a claim for which I could not find any corroboration.  In fact, the wines from Down Under appear to be the fourth most imported by the U.S. in dollars, behind Italy, France and New Zealand.  In any case, Americans are drinking more Australian wine than vice versa.

Australia's wine industry dates back to the 18th century, when vine cuttings were first brought to the continent from Europe and South Africa.  The country has no indigenous grapes of its own.  However, they do refer to Syrah as Shiraz, which has proven so popular that some other winemakers around the world have adopted the name.  Shiraz is the most widely planted grape in Australia.

The 2018 Two Hands Sexy Beast Cabernet Sauvignon is 100% McLaren Vale Cab, so it's not elegant as in Napa Valley, it's a brute, as in Australia.  The winemaker calls it "rich, brooding and powerful," and that just about nails it.  Alcohol hits 14.2% abv and the retail price is $33.

This wine is inky dark.  The nose is full of plums, blackberries and cherries, with a touch of bacon grease and earth.  More than a touch, actually.  The palate hits a sweet note amid the dark fruit and oak spice, although the latter stays in the background.  The tannic structure is young and firm, but not overpowering.  Tasted blind, I probably would have guessed Syrah instead of Cab.