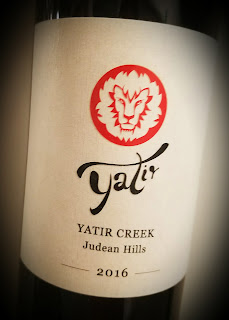 Yatir is billed as one of Israel's premier boutique wineries, releasing some 12,000 cases of wine each year.  The winery works with select vineyards which showcase the terroirs of Israel's Yatir Forest in the southern tip of the Judean Hills.  The Yatir kosher wines have won high praise from critics internationally.  Yatir's general manager, Yaakov Ben Dor, says wine presses existed in the region more than 3,000 years ago, so the heritage is there.  The winery itself has been around for fewer than 20 years, and Israel's present wine industry is very young.

The 2016 Yatir Creek is a red blend made from 76% Syrah, 12% Tannat and 12% Malbec grapes.  The fruit was harvested at elevations of 2100 to 2900 feet above sea level, where the soil consists of chalky clay.  The wine was aged in large oak barrels for 12 months and matured in the bottle for two years, and winemaker Eran Goldwasser says it will age and cellar well for five to 10 years.  The wine's alcohol content hits 14.5% abv, and it retails for around $50.

This inky wine's nose is a strong blast of dark fruit, and I do mean dark.  There is spice and oak, along with a strong element of forest floor, perhaps that of the Yatir Forest.  The palate is fruit forward, dark fruit forward.  The Syrah takes the lead, but the Tannat certainly makes itself known.  Even the Malbec's spicy character can't hide behind the Syrah.  There is a grapey note in the background which reminds me of Lambrusco a bit.  The tannins are firm, but not as forceful as I expected.