If Sherry Is Milk, This Is The Cream 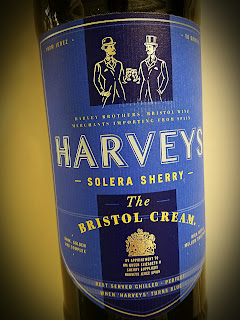 Billing itself as The Bristol Cream since 1882, when wine merchant John Harvey was importing what was known as Bristol milk, Harveys Bristol Cream was named after the British port city through which the product passed.  It's a sherry, not a liqueur, and it is the only Spanish product with a Royal Warrant from the Queen of England, which was issued in 1895.  As I understand it, that is much more desirable than having a warrant issued in your name by the district attorney's office.

The company advises you to serve The Bristol Cream "chilled or over ice in a wine glass with a slice of orange."  The iconic blue glass bottle now has one of those labels with a logo that turns blue when the perfect serving temperature is reached.  I find that no refrigeration is required, especially if the weather is cool.  It carries an alcohol content of 17.5% abv and sells for about $15.  It could be the best $15 you'll ever spend.

This sherry has a gorgeous chestnut brown color and an aromatic nose for days.  Raisins, brown sugar, dried apricots.  It's all on the palate, too - complex in an easy-to-understand way.  The sip is smooth but the acidity is quite useful if you want to pair it with food,  and the finish won't stop.