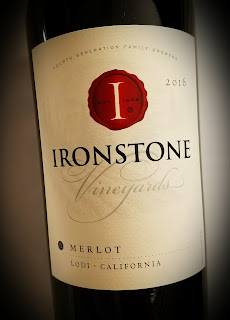 The little hamlet of Murphys, California is home to one of the nation's biggest wineries.  Ironstone Vineyards is located east of Lodi in Calaveras County, in the Sierra Foothills along Highway 4 north of Douglas Flat, Vallecito and Angels Camp.  It may be an out-of-the-way stop, but there's a better than average chance you've had some of their brands, or at least seen them on the supermarket shelf.

The Kautz Family are fourth-generation growers, not unusual in that part of the state, and the family-run winery's corporate officers are known simply as John, Gail, Kurt and Jack.

The Ironstone 2016 Merlot is made from three different Bordeaux grapes, grown in Lodi.  The wine is 85% Merlot, 10% Cabernet Sauvignon and 5% Cabernet Franc.  The Merlot grapes were sustainably grown in several sub-appellations of Lodi, with differing soils and climate.  The wine sat in French oak for only two months, it has an alcohol level of 14.5% and it sells for $12.

This wine is great for fall food pairing, with its fruit forward appeal and limited oak effect.  It will pair nicely with turkey and ham, which just may find their way onto your holiday table this season.

This is a very dark wine, showing a nose of black fruit, smoke, forest floor, tobacco and vanilla.  They say it aged in oak for only three months, but that’s hard for me to believe.  The palate is juicy and ripe, with oak spice aplenty.  The tannins are firm, but not toothy.  It's an affordable choice to pair with Turkey and ham over the holidays.