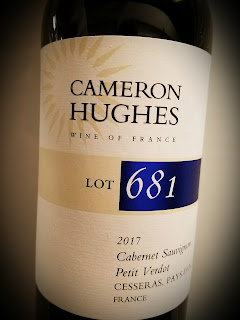 California wine négociant Cameron Hughes owns no vineyards and has no official winery.  He sniffs out good wine which has already been produced by established makers, then buys it on the down-low with an agreement not to reveal the source.  He then sells the wine online through his wine club - he calls it a wineocracy - bringing top-shelf wines to lower-shelf wallets.  Hughes says he keeps prices low by removing the middleman, the distributor and retailer through which store-bought wines must pass.

The Pays d'Oc IGP (Indication Géographique Protégée) covers most of the Languedoc-Roussillon region in southwest France.  IGP classification offers winemakers more freedom than the tightly controlled AOC (Appellation d'Origine Contrôlée) regulations.  This wine hails from the tiny rural community of Cesseras, in the Minervois AOC.  Smart seekers of wine bargains know to look to the south of France for great deals on great reds.

The Cameron Hughes Lot 681 Cabernet Sauvignon/Petit Verdot blend clocks in at 14% abv and sells for $13.  Hughes says it is his first French lot release in more than five years.

This is a dark wine, one with some heft to it, and a brawny feel.  The nose is full of blackberry and plum aromas, laced with earth, vanilla and mocha.  The palate is a burly delight - fruity with a savory, herbal edge, firm tannins a healthy acidity.  If you want steak, get this wine.  It's ready to pair.