Time For A Toast? Try Madeira 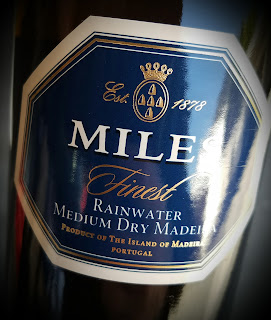 Madeira was the wine of choice for many of America's founding fathers.  John Hancock and the other representatives of the 13 colonies, it is said, toasted the signing of the Declaration of Independence with Madeira.  George Washington reportedly celebrated his inauguration as president of the young country with the fortified wine.  They say Thomas Jefferson toasted the Louisiana Purchase with it.

Miles Madeira Rainwater Medium Dry is lighter and drier than most Madeiras and has some of the longest aging potential in the wide world of wine.  It is fermented off the skins in stainless steel tanks, and fortified with the introduction of a grape spirit after five to six days.  This stops the fermentation at the desired sweetness level.  Aging takes place in the tanks, which are enveloped by hot water sleeves to replicate the effect of aging on board a ship during a long voyage.  The Rainwater's alcohol content hits 18% and the three-year-old wine retails for $17.

The characteristic aromas of raisins, brown sugar and dried fruits leap from the nose, while orange peel and notes of wood are found on the palate.  There's a wonderful acidity, so don't think you can only sip it - try pairing it with dinner - like our forefathers did.