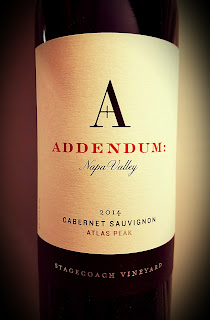 Santa Barbara County's Fess Parker winery is branching out. In the spirit of their founder's pioneering ways, the heirs of the barrels are heading north, to the Napa Valley, to create a new label. It's not just a footnote, but an addition to the Parker legacy. Addendum is the company's arm for Bordeaux-style wines.

The Addendum wines will be available in September, but I was able to snag a sample thanks to a Brandlive virtual tasting event put together by Charles Communication. There's history there, as Kimberly Charles worked closely with Fess Parker years ago. She helped the world realize that the man could not only rock a coonskin cap better than anyone, he made a damn great bottle of wine, too.

There's some nepotism there as well. Charles employee Greer Shull says she's a Parker family member, so this job hit pretty close to home for her. Parker's daughter Ashley Parker Snider, her husband and Parker President Tim Snider and winemaker Blair Fox all took part in the online session.

The virtual tasting is hosted here, if you’d like to take a look.

The Fess Parker winemaking program began 30 years ago in Santa Barbara County, with Rhône and Burgundian styled wines. The second generation of the Parker family is forging the new label for single vineyard Napa Cabernets. They source some grapes from Stagecoach Vineyard, and another noted plot that we cannot mention due to contractual restrictions.

Tim Snider says they felt they had to explore the possibilities presented by their vineyard relationships in Napa. In true pioneer fashion, they are blazing a new trail for themselves. Snider says the family did not make the move to producing Napa Cabs cavalierly. He says the main emotion at this point is enthusiasm. Ashley pointed out that they didn’t start a Cab label just so they could charge more for the bottles. Production on all four of the Addendum wines together is less than 800 cases, she says, so it’s more of a learning experience.

This wine is made of pure, 100% Cabernet Sauvignon from Napa Valley, the Stagecoach Vineyard in the Atlas Peak region.  Aging took place over 28 months in French oak barrels, 40% of which were new.  Alcohol at 14.9% abv is Napa-rich, and the wine sells for a similarly rich $95 per bottle.

This wine is medium dark and smells like expensive Napa Cab. The fruit is ripe and dark, but there is also a savory aspect that rolls up pencil shavings, sage, black olives and mocha into an aromatic ball. The palate is rather smooth, but with tannins that make themselves known on the back end. This will tame a steak and not work up a sweat.