There’s been much wine-related writing about Thomas Jefferson over the past decade or so. His love of fine wine, his travels through Europe to feed that love and his own desire to make a great American wine have been well documented. However, it’s hard for me as a modern-day person to overlook the obvious flaws that a man of his stature exhibited in those Colonial days. I'm talking about slaves.

The man for whom my high school was named, the author of the Declaration of Independence, the country's third president - he had issues that were pervasive at the time. He owned people, had them living in squalid rooms on his beautiful estate, had them do the work that the sprawling grounds required while he sat back and enjoyed life. They didn't spend a whole lot of time addressing that at Thomas Jefferson High School in southeast Texas. They didn't spend any time addressing it, as I recall. Perhaps it’s worth noting that the school no longer exists, that a predominantly African-American town still has a school named for Abraham Lincoln, but TJ bit the dust in favor of a more generic name, Memorial High. 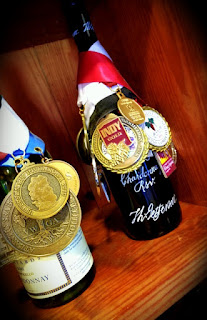 So, when I recently visited Monticello in Virginia, I was rather surprised at how matter-of-factly the tour guides deal with the slavery issue, among other shortcomings of Jefferson the man. I was also surprised that his wine obsession wasn’t more thoroughly documented by the docents. I wouldn’t have heard a word about it had I not asked a question during the garden tour.

Down the road from Monticello, a little off the beaten path - or, with a beaten path of its own - lies Jefferson VIneyards. The estate is situated near Charlottesville on land that was given by Jefferson to an Italian viticulturist from Tuscany named Filippo Mazzei. He was reportedly drawn to the U.S. by no less than Ben Franklin and John Adams, and Jefferson wanted him as his neighbor. Jefferson even copped a line from Mazzei for a paper he was writing. I think it went something like, "all men are created equal." 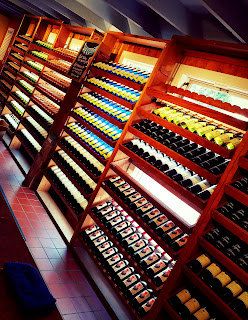 Chardonnay 2016 - Mostly stainless steel fermentation and aging, with only 5% done in oak. Tropical fruit and apples, with a slight effervescent quality.
Viognier 2016 - White flowers and summer fruit. Nice acidity, aged in oak and steel.
Rosé 2016 - Light salmon color, the result of only six hours of skin contact. An unusual mix of Cabernets Sauvignon and Franc with some Merlot.
Vin Rouge 2015 - Merlot, Cabernet Franc and Cabernet Sauvignon. Very light - earthy, yet sweet, 0.9% residual sugar.  It has an almost tart, plum and pinot noir taste and weight. It sure takes a chill well.
Cabernet Franc 2015 - Nine months aging in 80% neutral oak. It's a little light, with the expected pepper notes somewhat diminished. I was surprised by how unimpressed I was by it..
Merlot 2014 - Very light in color, slight smokiness, nice light cherry palate. A pretty good summer red.
Petit Verdot 2015 - This is a heavier red, deeper in color and not as tannic or bold as usually found n the variety. Cherry notes are a hit with chocolate.
Meritage 2014 - Petit Verdot, Cabernet Franc, Merlot and Cabernet Sauvignon. Dirty earth, nice savory angle. Rich, but would work with pork. 22 months in oak.
Vin Blanc - This dessert wine has only 4% residual sugar. It's a fairly earthy blend of Traminette, Vidal Blanc, Petit Manseng and other grapes.