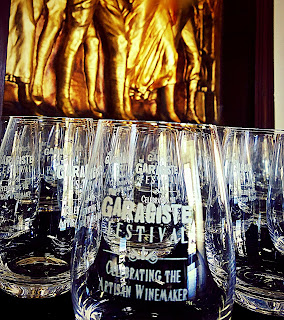 Here's a date to put on your calendar:  May 12, 2018.  That’s the next Garagiste Festival, a Northern Exposure event set for Sonoma.  I mention this because I recently attended the Garagiste Southern Exposure wine show, in Solvang, and I heartily recommend that you support them when they are near you.

The Garagiste Festival began in Paso Robles, an effort to spotlight some of the many small-production winemakers in that region.  The festival's name comes from the French word that describes small, maverick wine producers operating in garages instead of chateaux.  Most of the producers who pour at the Garagiste events have no "winery" - they buy grapes directly from choice vineyards and turn them into wine in low-overhead locations.  Most make fewer than a thousand cases per year. 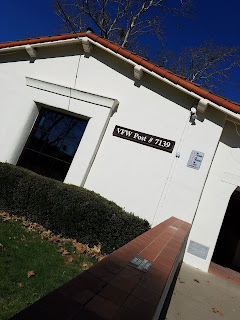 Stewart McLennan and Doug Minnick are co-founders of the Garagiste Festival, Lisa Dinsmore is the Event Director and Melanie Webber handles the public relations.  They once again rented out VFW Hall Post #7139 on a beautiful February day that cooled off a Southern California winter heat wave.  It was fitting to see the office of the Santa Barbara County Agriculture Commissioner right next door.  Forty-two low-production winemakers spilled more than 200 hand-crafted wines for the eager tasters, of which I was one.

Here are my notes from just a few of the wonderful wineries represented at the show:

Byron Blatty Wines - Los Angeles
Mark and Jenny Blatty own the 750-case producer.  Their 2015 Agenda Syrah/Tannat is a blend from Malibu vineyards.   Dark and juicy!  $58