A virtual wine tasting event was staged recently for Smith Story Wine Cellars.  "Virtual tasting" is when a bunch of wine writers/tasters get together on social media and spend an hour or so letting technology link us with great people and wines.  There are far worse ways to spend time.

This BrandLive event was put on by Charles Communications and can be viewed in retrospect here. 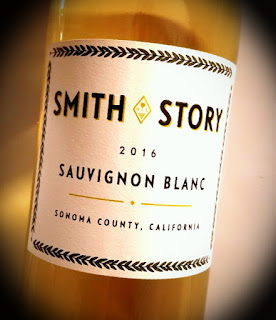 Smith Story Wine Cellars is based the Russian River Valley AVA, with a second tasting room in the Anderson Valley AVA.  Smith Story is credited as being America's first successfully crowd-funded winery.  Eric Story and Alison Smith Story call their 2013 creation "the little winery that did."  They call their relationship "a friendship that caught on fire."

Eric is from the San Francisco Bay area and Ali is a Lone Star Stater like me.  They met while both worked for K&L Wine Merchants in Northern California.  Pursuing their dream to make their own wine (on a budget), the newlyweds launched a Kickstarter campaign.  Their new alliance with Springboard Wine Company as their broker will take them from a"wine club" winery to a "wine list" choice, reaching their goal of getting the wines to diners in restaurants 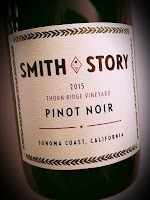 Smith Story Sonoma County Sauvignon Blanc 2016   $25
This almost clear wine smells as fresh as spring itself.  The typical grassy notes associated with the variety are mercifully muted, as is often found in Sauvignon Blancs pulled from California vineyards.  The nose also shows distinct citrus and wet rock components.  The mouthfeel is spry and racy with a very nice level of acidity.  The palate is clean, loaded with minerals and a peppery citrus zest.  Lemon meets spice and everything’s nice.

Thorn Ridge Pinot Noir 2015  $75
There were only three barrels of this wine made and it hits 12.9% abv.  The virtual tasters adored the tea leaves, bramble berries, baking spice, forest floor and mushrooms.  It was praised as an elegant wine, the kind Pinot Noir lovers love to love.

Sonoma Valley Cabernet Franc 2015  $40
Cabernet Franc is reportedly Eric Story's favorite grape variety, and the Loire Valley is the muse for his winery.  The virtual tasters loved this wine.  It is extremely dark; light has a tough time passing through the glass.  The nose is very savory, full of leather, minerals and bell pepper.  It's a "heavy" nose, one that conveys a very full flavor.  And so it is, but with a twist.  Instead of the black fruit indicated on the nose, red fruit comes through on the palate in fairly bright fashion.  The savory aspect is there, too, as spices drape over the flavor profile.  I can imagine that something off the grill, smoked in rosemary, would be a perfect pairing.

Pickberry Vineyard Cabernet Sauvignon 2015  $60
Virtual tasters liked the tart fruit and spiciness of this one.  They also complimented its nose of roses, licorice, black pepper and eucalyptus.