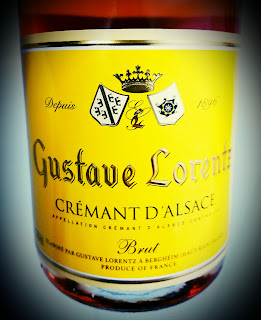 House Gustave Lorentz is near Bergheim, in the northeastern French area of Alsace, just across the Rhine River from Germany.  Charles Lorentz took up where his father left off, on an old mountain hillside.  Named a Grand Cru in 1983, the vineyard has been certified organic since 2012.

These bubbles are a cremant because they are not made in the Champagne region, although they are made the same way those wines are produced.  The grapes used are all Pinot Noir, giving the wine that "weighty" feeling.  Alcohol checks in at 12% abv and the wine sells for $30.  Lorentz made 2.500 cases, which are imported by Napa's Quintessential Wines

This fun bubbly from France's Alsace region is pretty in pink and pleasantly pungent.  The brut smells like more strawberries than you could fit into a bushel basket.  There's also a lovely, light earthy note, which leads on the palate.  Toasty flavors come into play, along with what the importer calls a "discreetly fruity" aspect.  A citrus peel note sneaks in late and finishes long and earthy.  Great acidity.