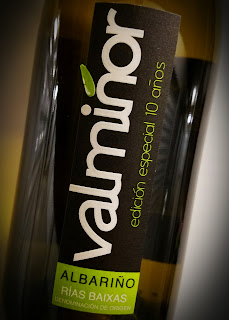 The Albariño grape is the king of the vineyards in Spain's Rías Baixas region, in the northwest corner of the country.  Adegas Valmiñor makes theirs in the sub-region of O Rosal.  It's a little piece of land butted up against the Miño River to the south and the Atlantic Ocean to the west.

Winemaker Cristina Mantilla is one of many females in the region who are breaking into the male-dominated industry.  She uses Albariño grapes only to produce this varietal wine.

Vinified in stainless steel tanks, the wine sees no oak and is aged a short time in the bottle.  It hits 12.5% abv and sells for under $20.

The 2017 Adegas Valmiñor Rías Baixas Albarino is a yellowy green in the glass, with a nose of flowers and earth and a palate of minerals, apricots, grapefruits and peaches.  There's a zippy acidity which, when paired with the minerality, will be a great match for oysters.  The medium finish allows the wine's refreshing character to last a while longer.