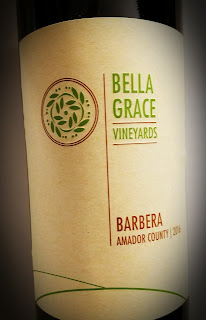 Bella Grace Vineyards is located in the Sierra Foothills region of Amador County.  Run by Michael and Charlie Havill, their vineyard sits on 20 acres in those granitic rolling hills.  The winery says Michael is "one of the few elite female winemakers in California," while husband Charlie is credited with being the mastermind behind the vines.  The winery was named for their two grandmothers.

The 2016 Bella Grace Amador County Barbera was made using grapes from five different vineyards: Cooper, Baartman, Crain-Sleeper and Wilderotter vineyards in the Shenandoah Valley appellation, and Shake Ridge Vineyards elsewhere in Amador County.  The wine was aged for 21 months in new French oak barrels.  Alcohol hits 14.5% abv and sells for $33.

This wine comes on with a bit too much oak for me.  Bright cherries and spice on the nose are obscured by the wood effect, but it's not so pronounced on the palate.  There's great fruit here when it shines through.  Firm tannins beg for meat.  Sausages?  Bolognese sauce?