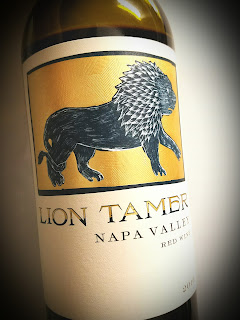 The people at Hess say the lion on their label represents the winery and its founder, Donald Hess.  With estates in Argentina and South Africa as well as Napa Valley, this winery really gets around.  Hess staked out a claim on Napa's Mount Veeder in the 1970s, when there was still room to move around.  He retired in 2011 and passed the torch to the 5th generation of the family to carry on old traditions and forge new ones.  Dave Guffy is only the second person to lead the winemaking team at Hess.

Guffy uses their Malbec to "tame" the powerful tannins of their Cabernet Suavignon.  Lion Tamer contains 40% Malbec grapes, 27% Zinfandel, 21% Petite Sirah, 8% Cabernet Sauvignon, 2% Mourvèdre and a splash each of Petit Verdot and Merlot.  The wine was aged 22 months in French oak, 40% of the barrels new.  Alcohol peaks at 14.8% abv and it retails for $45.

Guffy explains that the weather for the 2016 vintage was nearly perfect, not too unusual for California grapes.  While consumers go on and on about the taste of a wine, grape people go on and on about how those grapes got here.  "Winter gave us our average amount of rainfall followed by a warm spring that allowed most varieties to set a nice crop," says Guffy.  "August cooled things off and allowed some increase in hang time, and we didn't see any major heat spikes during September and October.  Yields were above average for most."  He hailed the crops for giving fruit of excellent quality.

This dark ruby wine's nose shows bright red cherry and plum, black pepper and a hint of vanilla.  The palate features big fruit, mocha and a nice savory tobacco edge.  Great tannins and acidity make it a wonderful wine to pair with beef.  The oak treatment is beneficial, not overdone.  The wine finishes strong with fruity earth notes.