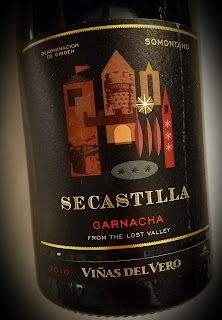 Spain's northeast corner contains the little town of Secastilla, in the Aragon region of Somontano.  Government numbers show that fewer than 150 people live there, and I'll bet they all like this wine.

Viñas del Vero's 2010 Secastilla Garnacha should be considered a national treasure.  The wine was made from Garnacha grapes grown on 100 year-old vines, vines discovered in Spain's Secastilla Valley, amid almond and olive trees in the foothills of the Pyrenees Mountains.  Alcohol hits 14% abv, aging happened over 10 months in new French oak barrels and it's selling for around $30 online.

The dark wine gives some amazing aromas on its nose.  Black cherry, plum and chocolate hit the strongest, while the leather and tobacco I expected to shine took a back seat.  The palate is savory, with the dark fruit carrying a load of earth and minerals.  Tannic structure is still bristling with youth, and the wine finishes with baking chocolate.  Have it with any kind of meat, but keep it on the table for dessert, hopefully something chocolatey.