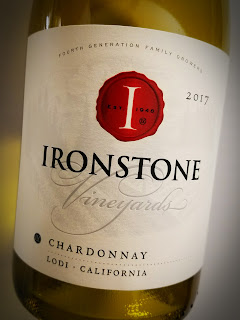 The little hamlet of Murphys, California is home to one of the nation's biggest wineries.  Ironstone Vineyards is located east of Lodi in Calaveras County, in the Sierra Foothills along Highway 4 north of Douglas Flat, Vallecito and Angels Camp.  It may be an out-of-the-way stop, but there's a better than average chance you’ve had some of their brands, or at least seen them on the supermarket shelf.

The Kautz Family are fourth-generation growers, not unusual in that part of the state, and the family-run winery's corporate officers are known simply as John, Gail, Kurt and Jack.

Ironstone's 2017 Chardonnay is on the dry side, and it's the only Chardonnay I've encountered which has a sweetness scale on the label, as in Rieslings.  This one points to just off medium dry.  In my opinion, I never have much trouble with how dry or sweet a Chardonnay is.  What I'd like to see is an oak meter instead.  This wine spent only five months in French oak barrels.

The 2017 Ironstone Vineyards Chardonnay is made from 90% Chardonnay grapes, 5% Viognier and 5% Chenin Blanc, sourced from several appellations, including Mokelumne River and Sloughouse.  The wine checks in at the expected 13.5% abv and sells for $14.

This Lodi wine is straw-yellow in the glass, with a nose that sports oak predominantly, citrus and tropical notes along for the ride.  The palate gives more fruit than oak, apples, peaches and lemon most notably.  It's very tasty and not weighed down by excessive oak.  Pair with light spring and summer fare or sip it on the porch.