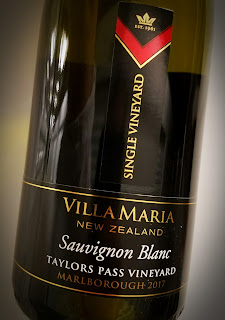 Welcome to Aotearoa - that's Māori for New Zealand - and the bold, delicious wines made there.  I'm a full-flavor kinda guy most of the time, so I've always been most intrigued by the wines of the Kiwi.

Villa Maria was founded by George Fistonich in 1961 as a five-acre vineyard in Auckland.  He and his wife ran the show themselves until he expanded in the 1970s.  They now have estate vineyards on both the North and South islands.  Sir George was knighted by his government in 2009 for his service to the nation's wine industry.  He took Villa Maria fully screwcap in 2001.

Villa Maria's Taylors Pass Vineyard sits next to the Atawere River, with soils ranging from silty loam to stony gravel.  The winery claims the terroir generates an intensely aromatic Sauvignon Blanc grapes.  During an online tasting event, one participant wrote that opening this single vineyard wine is like sticking your nose into a grapefruit cut in half.  Another found a focused display of lemon ice and fleshy melon intertwined with a potpourri of minerals and spice.  Alcohol is in check at 13% and the bottle retails for $26.