Zinfandel And 18 Months Of Oak 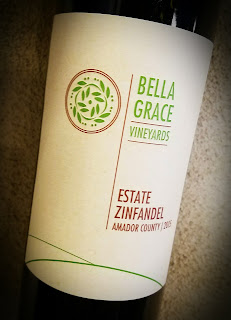 Bella Grace Vineyards is located in the Sierra Foothills region of Amador County.  Run by Michael and Charlie Havill, their vineyard sits on 20 acres in those granitic rolling hills.  The winery claims Michael is "one of the few elite female winemakers in California," while husband Charlie is credited with being the mastermind behind the vines.  The winery was named for their two grandmothers.

Bella Grace grows four clones of Zinfandel in their estate block, vines which are eight to 16 years old.  The 2015 vintage was early, from bud break to harvest, but no unusual events were reported.  The Bella Grace Estate Zinfandel Amador County 2015 was a double gold award-winner in the San Francisco Chronicle Wine Competition.

The wine spent 18 months in French oak barrels, a quarter of which were new.  The alcohol level sits at 14.2% abv and the wine sells for $34.

This Zinfandel sports a nose of blackberries and plums, laced with a generous helping of clove, nutmeg, cigar box, smoke and vanilla.  Eighteen months in oak is a long time.  A peppery note lies underneath and carries through, more prominently, on the palate. Flavors of dark fruit mix with herbs and spices for a delightful sip.  The tannins are fairly forceful and the finish plays long and dark.