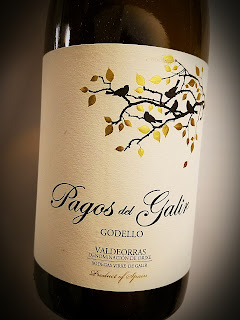 The Valdeorras region in Galicia was named by the Romans, who mined a lot of gold there.  After they had finished their mining days, they planted grapevines in the area.  The 2017 Pagos del Galir Godello is a full varietal wine made from a reclaimed grape.  Godello was figured to be native to Valdeorras before DNA testing showed its Portuguese roots.  The grape was re-introduced to the region during the 1970s.

The white Godello grape, writes Eric Asimov, has been "rescued" by Spain, particularly the area of Valdeorras, in Galicia.  Plantings of the grape have risen markedly in recent years, and its grapefruit-tinged flavor profile and wonderful acidity make it a great wine to pair with food, especially summer salads, seafood or even sweet corn tamales.

2017 was one of the DO's shortest vintages on record, and was affected by April frosts.  The wine rested on its lees - spent yeast cells - for five months before bottling.  Alcohol is moderate at 13.5% abv and it sells for $17.

This was my first experience with the Iberian Godello grape.  I expected something quite fruity from this wine, but was surprised to find a nose of lanolin, sage and a savory nuttiness.  The palate is just as intriguing, with savory herbs and a distant grapefruit flavor in the background.