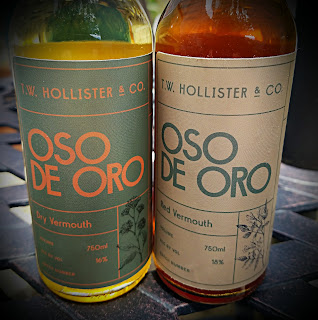 Vermouth is an aromatic, fortified wine which is flavored with such things as herbs, roots, flowers, bark or practically anything that grows.  It originated in the 18th century as a medicinal aid.  Over the years, vermouth dropped from the pharmacy to the bar, where it became an aperitif and now resides as a necessary component of cocktails like martinis, Manhattans and negronis.

White vermouth - dry - is sometimes called French, while the red, sweet kind is called Italian.  Those two countries produce most of the vermouth that you'll find on the shelf, although it's also made in Spain and the U.S., as we will see.

T.W. Hollister and Company makes these vermouths using ingredients sourced in Santa Barbara County, whenever possible.  They say they’re perfect for sipping on their own over ice or in your favorite martini on a hot summer night.  They promise that American vermouth is about to have its moment.

Their first round came out early this year and reportedly sold out in just one week, prompting an expanded production effort.  Both the red and the white are handcrafted in California, reach 16% abv and sell for $35.

Oso de Oro Dry Vermouth is made from white wine and infused with a dozen botanical ingredients, including orange peel, chamomile and rosehip.

Oso de Oro Red Vermouth is infused with 19 botanicals, some of which grow on the family homestead. White wine is infused with herbs, roots and flowers, then finished with caramel, enhancing the texture and imparting a sweetness to balance the wine's natural acidity.  Blood orange, chamomile and hummingbird sage lend fruit-forward and herbal notes to the complex layers.

The dry Oso de Oro dry (white) vermouth smells as herbal as it gets.  Juniper comes across as well as the rosehips, chamomile and orange.  The palate shows a bit more orange peel and is, as promised, dry as a bone.  The sweet (red) vermouth has an herbal nose with a caramel backbeat.  That treat comes through stronger in the sip.  It's negroni-ready.