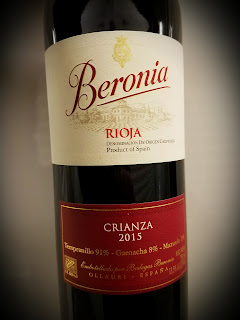 It was Spanish wine that started my own interest in the broad spectrum of vino.  It dragged a self-described "beer-only" guy into the wide world of wine after attending a tasting of Spanish wine on a lark.  I think about that tasting every time I have a glass of Rioja.

The 2015 Beronia Rioja Crianza is made up of 91% Tempranillo grapes, 8% Garnacha and a splash of Mazuelo.  The wine aged for 12 months in barrels with French oak tops and American oak staves, imparting vanilla notes from the American wood and spice from the French, and it's been in the bottle for a couple of years now.  It carries an alcohol content of 13.5% abv and retails for about $20.

This Spanish red is dark in the glass as well as on the nose.  Blackberry and plum aromas abound, with oak spice playing a supporting role.  The palate displays black fruit, sweet notes and powerful tannins.  Bring on the ribeye, hot off the grill.