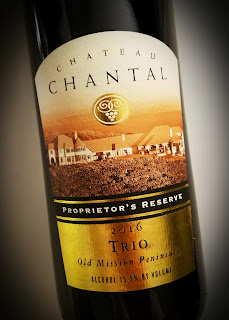 The locals call it paradise on a peninsula.  Michigan's Old Mission Peninsula wine region sticks out of the northwestern edge of the state's main body into Lake Michigan.  Situated on the 45th parallel, about the same latitude where you find Bordeaux, it's a 19-mile spit which juts northward and forms the east and west sides of Grand Traverse Bay.  It's only four miles wide at its broadest point.

They grow wine grapes there.  The blue waters surrounding the land are some 600 feet deep, which produces what they call a "lake effect" which I am told protects the vines with snow in winter, slows bud break in spring to avoid frost damage, and extends the growing season by up to four weeks.

There's a thriving wine AVA on the strip of land, along with breweries and distilleries.  I've tasted Michigan wines before and found them to be of very high quality, so I had high expectations when the Old Mission Peninsula reps sent some of the region's wines to me for sample.  I was not disappointed.

Robert and Nadine Begin, along with daughter Marie-Chantal, opened Chateau Chantal in 1993 as a winery and bed and breakfast inn.  Both Robert and Nadine worked in the Catholic religion before shifting gears into other careers, and eventually, into the winery.

The Chateau Chantal Proprietor's Reserve Trio 2016 is made from 61% Merlot grapes, 38% Cabernet Franc and a dash of Pinot Noir.  The wine holds alcohol at 13.5% abv and it retails for $27.

The two Bordeaux varieties and one from Burgundy give the wine its characteristics - smoke and spice from the Merlot, full fruit and herbs from the Cab Franc and a tart finish from the Pinot.  The Pinot shows much more than 1% might suggest.  Smoke, herbs and a coffee-cola note lead the way on the palate, with fresh acidity and smooth tannins accompanying them.