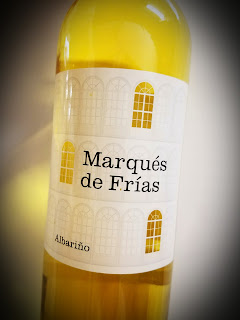 The folks from the Spanish wine region Rias Baixas have a great product to push.  Albariño is not only a delicious white wine on its own, but it's one of the more food-friendly grapes you'll find.  In fact, Albariño seems to crave a food pairing so it can show its best.

Other writers commented on the great pairings they were having during the event.  A Spanish omelet, chicken and waffles, bouillabaisse, roasted fish with citrus and turkey are just a few of the inspired pairings that sprang from the tasting.

Wine writer Lyn Farmer notes that the Rias Baixas region in Spain's northwestern corner  has a sense of tradition, but is not bound by it.  Half of the area's winemakers are women.

One of the best of the offerings of the event was the Marqués de Frías Albariño 2017.  Winemaker Carlos Blanco vinifies this 100% Albariño wine in stainless steel to 12.5% abv.  It sells for a super-low $13, a steal considering the high quality.  The estate vineyard is composed half of granitic soil with the rest divided between clay and sand.

This wine has a rich, golden tint and shows not the fruity, flowery nose one expects from the grape, but a savory salinity more often found in Roussanne, Marsanne or rare Pinot Gris bottlings.  The palate follows suit - salinity carrying the apricot and pear notes - with a wonderfully food-friendly approach.  The acidity is zippy and the finish falls barely on the tart side.  If all Albariño wines tasted like this one, I'd drink more Albariño.