Lodi Cab Is Quick On The Draw 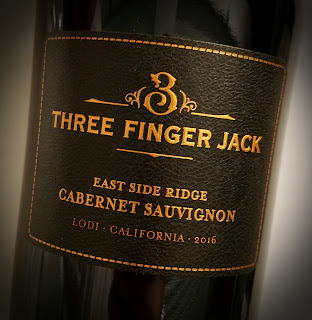 The Delicato family named their Three Finger Jack Cabernet Sauvignon after an outlaw from California's Gold Rush days.  The Lodi wine's label proclaims that the juice inside is "outlaw by nature."  There's no confirmation that Jack Dunlop had a three-fingered hand, but it's true that the former Texas cowboy found robbing banks and trains to be more lucrative than corralling dogies.  It also proved to be his end, as he died from a gunshot taken in his last heist.

There appear to be no outlaws in the Delicato family tree, though.  Their website says the winery's founder, Gaspare Indelicato, "came to America more than a century ago and planted a vineyard just south of Lodi," which reminded him of Sicily, his grape-growing home.  The family still runs the business, now training a fourth generation to take the reins.

The 2016 Three Finger Jack Cabernet Sauvignon is made from grapes grown on Lodi's East Side Ridge, at the foot of the Sierra Mountains, in low-nutrient soils which stress the vines and make for a more intense wine.  Part of the wine was aged in French and American oak, while the remainder was aged in steel tanks.  Alcohol hits 15% abv and it sells for $22.  The squatty bottle stands a good three inches shorter than a typical wine container, but holds the standard 750 ml.

This wine plays the outlaw image to the hilt.  Lodi Cab faces off in a dusty street against Napa Cab, the fastest gun in town.  They both shoot straight, but in different directions.  Three Finger Jack has a nose of rustic black fruit, tar, forest floor, with only a hint of graphite.  The palate leans in a more elegant direction, but still stands its ground as an "outsider."  It's a delightful drink, with plenty of pairing power and the tannic structure to prove it.