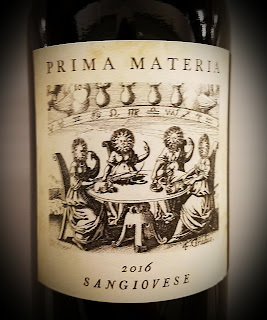 Prima Materia doesn't sound at first like an Oakland winery, but it is.  Winemaker and owner Pietro Buttitta grows his grapes two and a half hours to the north, in Lake County's Kelsey Bench AVA.  He focuses on Italian varieties - from Sangiovese to Barbera to Refosco to Negroamaro.  Buttitta says he planted most of those grapes himself and has worked the vineyard for the last eleven years.  He claims to find a clear Lake County voice for his minimally handled wines, one that maintains a "distinct Old World finish and feel."

The Prima Materia 2016 Sangiovese is made from four clones of the grape, grown in the volcanic soil of the region.  The winery claims that it reflects the growing area and respects its Italian heritage.  The grapes were nearly dry-farmed, with no pesticides used.  Buttitta refers to the 2016 vintage as "almost boring," but the fourth consecutive drought year brought just enough rainfall.

The Sangiovese is abetted by 8% Aglianico grapes.  The wine was vinified and aged 18 months in neutral barrels of French and Hungarian oak.  Alcohol tips 14.1% abv, a little heftier than most Italian Sangioveses, and it sells for $25.

This Cal-Italian grape expresses itself well.  The effect of the oak barrels is apparent on the nose, with delicious vanilla, clove and spice notes wafting upward.  Red fruit shows up, too, but it's the accessories that draw attention first.  The palate brings the cherry flavor forward in a dramatic presentation, elegant and a bit rustic at the same time.  The oak may be a bit overplayed, but it's an attraction, not a distraction.  The wine finishes fresh, clean and fruity.