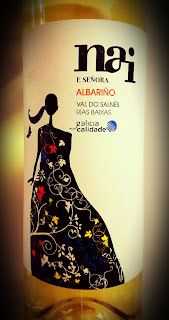 The folks from the Spanish wine region Rias Baixas have a great product to push.  Albariño is not only a delicious white wine on its own, but it's one of the more food-friendly grapes you'll find.  In fact, Albariño seems to crave a food pairing so it can show its best.

Albariño wines tend to show up online a lot, in virtual tasting events where wine writers gather together with a sponsor - in this case, Snooth - to sample a few selections.

Other writers commented on the great pairings they were having during the event.  A Spanish omelet, chicken and waffles, bouillabaisse, roasted fish with citrus and - yes - Thanksgiving turkey are just a few of the inspired pairings that sprang from the tasting.

Wine writer Lyn Farmer notes that the Rias Baixas region in Spain's northwestern corner  has a sense of tradition, but is not bound by it.  Half of the area's winemakers are women.  Wine writer Dezel Quillen says if your wine shop doesn't carry Rias Baixas Albarino, they need to.  He says, "These Spanish wines are quite versatile and extremely food-friendly—especially with seafood dishes."

From the Terra de Asorei winery comes Nai E Señora Albariño, a beauty of the Rias Baixas region.  The winery explains that the name derives from Nai e Señora - Mother and Lady - an expression used by poets in the early 20th century "to pay homage to working women who guaranteed the independence of the family and the Galician society and their motherland: Galicia."

The Salnés Valley is located on the left bank of the estuary of Arousa.  Winemaker Jorge Hervella works with Albariño grapes grown in rocky clay soil studded with pink granite.  The apparently non-vintage wine was fermented in stainless steel tanks, carries alcohol at 12.5% abv and sells for less than $20.

This yellow-gold wine has aromas that are more herbal than floral, with savory dill bolstering the citrus and stone fruit.  The palate carries much citrus along with savory balsamic notes.  Acidity is great, and makes for a lively pairing with a variety of salads and seafood.