Spanish wine company Tio Pepe sponsors a yearly contest to see which bartender around the globe can come up with the best cocktail utilizing their Tio Pepe Jerez Xérès Sherry.  I'll admit, I was sort of pulling for the barkeep from Las Vegas, who made it to the finals.  In the end, Europe took the honor. 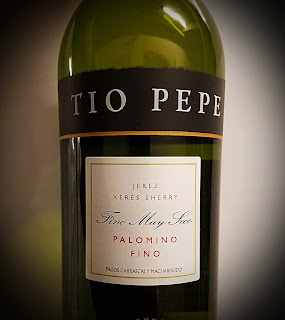 The Bodega Gonzalez Byass has been in Jerez - southern Spain, the Andalusia region - for nearly 200 years.  Tio Pepe Jerez Xérès Sherry is named after the founder's uncle Pepe.  The vineyard soil in Jerez is chalky, all the better to hold moisture during the long, hot summer.

Tio Pepe is made from 100% Palomino Fino grapes, and is fortified to 15% alcohol.  Any higher and the flor could not form, the yeasty layer that covers the wine while it's in American oak barrels and prevents oxidation for the four to five years of aging.  The Solera method is used, with wines blended from vintage to vintage.  The types of sherry and their production is much more complex than my limited knowledge.  If you're interested, please read up online.  You'll be glad you did.  The sherry sells for $20.

This sherry has a golden-yellow tint and a forceful nose.  That wonderful resinous sherry smell is there in spades, along with walnuts and anise.  The sip offers similar wonders, with a completely savory approach.  It's as dry as a bone, provided the bone was lying in the desert sun for a while.  There's not a lick of sweetness, so it's not Grandma’s sherry.  The chalky vineyard soil seems to speak through what these Palomino Fino grapes have wrought.  There are notes of hazelnut, lemon and the all-important yeast layer - flor - that sits atop the wine in the barrel for five years.  The acidity is decent, but not too forceful, and afterward, the finish lingers with anise lasting the longest.  Wow, is all.