Albariño With A Twist 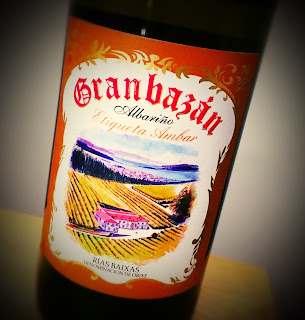 Bodega Granbazán is in Spain's Rias Baixas region, where they know all about good Albariño.  The winery was established there in the Salnés Valley in 1981.

The grapes for Etiqueta Ámbar (amber label) came from vines more than 35 years old, destemmed, with a gravity free-run.  Winemaker Jesus Alvarez Otero says that this wine gets fruit from the Finca Tremoedo vineyard, the warmest plots on the estate with the most fertile soils.  The wine was fermented in steel tanks over three weeks, then aged there for five months on the lees, then three months in the bottle.  Alcohol is the expected 13.5% abv and the retail price is $22.

This Albariño offers up a serious and complex nose.  One whiff it's the ocean.  Next whiff it's a field of flowers.  Then, nectarines and tangerine zest.  I know I am in for a treat before I take a sip.  When I do, the pale golden wine delivers stone fruit up front, with plenty of salinity close behind.  The acidity races, then is gone.  It's great while it is there.  That odd citrus/salt flavor lingers, on a finish that is all too brief.